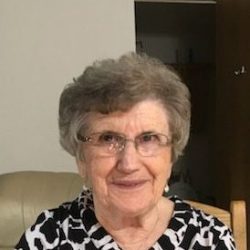 Kay was born in the Laniwci district on October 9, 1929. She married Edward Bayda in 1948 and farmed in the Smuts area. Kay worked hard in helping with running a mixed farm and planting huge gardens. In 2012 they retired and moved to St. Volodymyr Villa. Her husband passed away a few weeks later. Mom was a regular attendant at the Villa Chapel. Kay was a social person that attended many of the functions that were held there.

A private mass of Christian burial will occur on Friday, March 5th at 11:00 a.m. at St. Volodymyr Chapel with interment to follow at Woodlawn Cemetery.  The service will be livestreamed at https://www.faithproductions.ca/livestreams

Memorial donations in Katherine’s honor can be made to the Hospice at Glengarda.

It is said “the harder we work the more we live”, and now those values are handed down to the new generations.