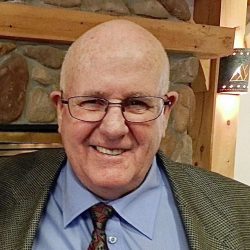 A dedicated and loving husband, father, and grandfather; a caring sibling; and a supportive friend, Kenneth Ector died peacefully on July 16, 2022, at the age of 76.

Born on Nov. 5, 1945, and raised in Elbow, Sask., Ken was the baby of the family, growing up with five older siblings. In the winters, he loved curling and playing hockey. In the summers, he was often found on the ball diamond or eventually getting behind the wheel of his prized Dodge Charger.

On May 17, 1975, he married the love of his life: Joan Schellenberg. During their 47 years together, they welcomed daughter Melanie in 1976, followed two years later by daughter Leah. Raising the girls in the Wildwood and Lakeridge communities, they fostered friendships that lasted their entire lives.

Throughout his life, Ken — easy-going, quick to laugh — was part of a home in which his family formed lasting memories: summers at Brightsand Lake and Rocky Lake; trips to Disneyland, Mexico, Arizona, and favourite visits to Hawaii; card games or chess matches; time spent back home in Elbow; endless hours supporting Leah and Melanie on the basketball courts; and as a grandparent cheering for Josh on the soccer pitch and Sydney and Sierra on the soccer fields and basketball courts. In his grandest dreams, Ken might have starred as a running back with the Saskatchewan Roughriders. In reality, he settled for being a fan to the end.

Professionally, he spent more than four decades working on the highways for the province. In retirement years during which time, he barely slowed down, he was a vital and beloved 16-year member of Saskatoon Nutana Lions Club, where he proudly ran the annual flea market for nearly a decade and was honoured with two fellowship awards and the Lion of the Year award.

He was predeceased by parents Viola and Archie Ector; and siblings Bill (Maureen), Gordon (Lucille) and Dorothy.

The family would like to thank the staff at St. Paul’s Hospital for the exemplary care Ken received during his stay.

A service in memory of Ken is scheduled for July 24, 2022, at 2 p.m. in Elbow (Bethel Lutheran Church, 1360 Railway Avenue). In lieu of flowers, please consider a donation to Canadian Pulmonary Fibrosis Foundation, the Friendship Inn through Saskatoon Nutana Lions Club, or the Lions Foundation of Canada Dog Guides.