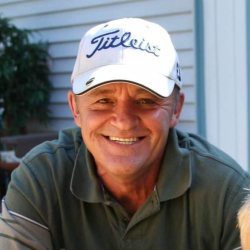 Kenneth Leslie Mudd was born April 16,1952, in Saskatoon, Saskatchewan to Bill and Alma Mudd. He was the second oldest in a family of 5. While working at a carwash in Saskatoon, he met Norma. The “cute gal with long red hair”. They fell in love and were married in 1972. In April of 2022, mom and dad celebrated 50 years of marriage! This marriage blessed them with 2 daughters. Vicki (Kevin) Anderson and Christel (Josh) Butcher. He was also blessed with 4 grandchildren, Brandon (Janelle) Thiessen, Kelsey (Kyle) Schmidt, Jordyn and Nate Butcher and 2 step grandchildren, Briana (Adam) Deutscher and Braden (Kayla Manning) Anderson, as well as 5 great grandchildren Elias, Riley, Jada, Cole and Stella. He loved those grand/great grandkids of his!

Ken and Norma spent most of their married years living in Waldheim.  They were back and forth from Saskatoon to Waldheim a couple times, but Kens final move was to Bethany Manor in Saskatoon in 2020 until his passing, December 7, 2022.

Ken got a job at Sask Wheat Pool and was employed there for 30+ years. After retirement he really enjoyed yard work not only for himself but doing it for others as well. A neat and tidy yard was something else Dad took great pride in. In retirement Ken loved going out to Alberta to help with silage and harvest. He had his favourite old blue truck he hauled grain in that he nicknamed “Bud Light” and the home made grain cart he ran around with that he nicknamed “the white elephant” There were many late night suppers and great memories made over these years.

Ken loved sports and a highlight for him was being able to watch his grand kids play hockey and ball.  He even got to travel along on a couple bus trips. He supported his grandkids, and you’d often find him boasting to anyone that would listen about all their achievements and let them know he was their grampa. He was such a proud grampa!

Ken enjoyed watching a variety of sports. The Habs perhaps were his favourite team “since he was knee high to a grasshopper” he would always say. He also liked the Toronto Bluejays and the Saskatchewan Roughriders and would often recap the games with his mom who was also an avid Riders fan. You’d also find him watching curling and tennis on t.v. and enjoyed “putting a few bucks on a game” Kevin knew that when those Riders played the Stamps or Jennifer Jones was in a curling final, he’d be getting a phone call. Ken was also known to his family as the barbecue king. He loved grilling a good burger or steak and it didn’t matter whose house he was at. None of us will forget the taste tests he’d always give out before to “check if the meat was done”. Sometimes a whole burger would be gone by the time he was done. A tradition that now his son in laws, grandson and granddaughter do as well.

During Kens life journey he was an avid golfer and enjoyed travelling to Arizona to play with his dad and friends. He was a large part of the golf course in Waldheim and spent a lot of time there. You would find him here in a round of golf with the boys everyday by 7. Together with his best friend and partner in crime Lorne Ratzlaff they organized many, many golf tournaments in Waldheim. Ken also enjoyed many years of refereeing and lining hockey for the Waldheim warriors and the Laird Jets. Many stories were told from those days.

Family was what mattered most to Dad, and we always knew he had our backs.  He would always stick up for us and would be there when we needed him. Ken will lovingly be remembered by his wife of 50 years, Norma. His 2 daughters Vicki and Christel and their families, his brothers, Murray Mudd and Lyle (Gail) Mudd and his sister Valerie (Alain) Guillet. Ken is predeceased by his dad Bill (2008) his mother Alma (2021) His sister Donna Falkins (2018) and sister-in-law Donna Mudd (2022).

In lieu of flowers, donations may be made to Stars Air Ambulance. Without Stars we may never have enjoyed these last 3 years together.

Rest In Peace Dad.  We love you ❤️

A Celebration of Kenneth’s life will be held on Saturday, December 17, 2022, at 1:00 p.m., at Martens Warman Funeral Home Chapel, 402 Central Street West, Warman, SK. Interment to follow at the Waldheim Cemetery.

Martens Warman Funeral Home is honoured to be entrusted with Kenneth’s arrangements.