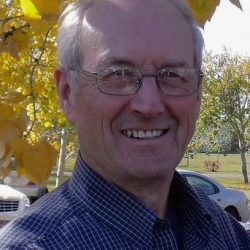 It is with sadness that the family announces the death of Larry, beloved husband of Shirley, father of Terrance (Carol), Leslie (Lin) & Gregory (Cassandra). Grandfather to Andrew, Trevor, Mitchell, Tyler, and Jaquelyn. Great-grandfather to 4 great grandchildren.

Larry was predeceased by his parents Harold and Ruth as well as his sisters Helen Meiklejohn and Linda Jmaeff.

He was born in Quill Lake, SK. He enjoyed painting and decorating which is a common trait among Harold and his children. That interest lead him to work with his dad at Harold’s painting and decorating store in Saskatoon, until moving to London, ON to manage 3 paint stores for Northern Paint. After 2 years he and his family moved to Winnipeg, MB where he was Vice President and general manager of Northern Paint.

Larry’s focus was on family, but he was away frequently which made Larry and Shirley want their family together in a farming environment. They bought a farm in Quill Lake in 1970. In 1978, they moved into the village of Quill Lake and bought the hardware store where he also served as the village’s fire chief. Larry and Shirley’s strong bond with their family was evident as they continued to work together on projects on the acreage and otherwise. In 2014 they moved away from Quill Lake to live in Saskatoon.

His faith in serving Jehovah was evident right up to the time of his death as he made clear to all involved in his healthcare his stand for upholding Jehovah’s standards.