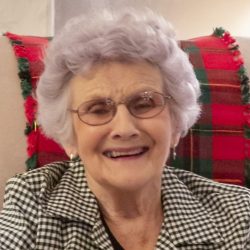 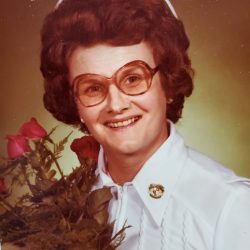 Leona Remple (Brucks) was born on July 13, 1929. She grew up with her parents in the community of Barns Crossing. They lived and grew up on a farm, a short distance from the school and church.

Leona had 2 sisters, Beatrice (deceased) and Darlene, and one brother, Dick.

She grew up on the farm about 20 miles northwest of Meadow Lake. There she attended school and church until the family moved to Meadow Lake where Leona continued her education through grade 10. After that she worked as a clerk in the grocery stores and as a Nurse’s Aide in the local hospital. That was followed by four years of Bible School. While living on the farm, a revival took place and the Remple family became Christians as did many others in the area. That faith was the center and testimony of the rest of Leona’s life.

On October 14, 1951, Leona married Dennis Brucks. Together they had six children, five sons and one daughter, who, with their mates, gave the family 20 grandchildren and thirty one great-grandchildren.

After Dennis graduated from Bible School in 1953, Dennis and Leona went into pastoral ministry which lasted until the summer of 1999. Their ministry began in Davidson and Craik, Sk and continued in; Mabridge, South Dakota; Elgin, North Dakota; Kenora, Ontario and finally back in Saskatchewan in Midale and Martensville. They continued in church ministry until 2018 when Leona’s health made it impossible to continue.

Leona was a true pastor’s wife in many ways, as a mother, wife, in visitation, teaching in Sunday School, Vacation Bible School and Women’s Ministries, etc. She also had great musical talent. She played both the piano and the organ, sang a beautiful alto with her husband Dennis, in trios, choirs etc. Leona also served as the Choir and Music Director Baptist Church.

Leona’s talents were not limited to music. She was also a great cook and enjoyed baking, doing crafts, knitting, sewing, and painting to name a few. Everything had to be, not necessarily perfect, but the very best!

Leona was a wonderful wife, mother, grandmother, great-grandmother, and friend to many. She was greatly loved by her family and many others and she will forever be in our thoughts and hearts.

Two favorite Bible verses that suit her well are I Corinthians 16: 13 – 14, “Watch, stand fast in the faith, be brave, be strong. Let all that you do be done with love”.