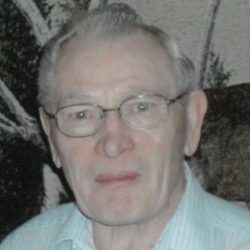 It is with heartfelt sadness that we announce that Lorne Hildebrandt, who was born November 7, 1929, passed away in St. Paul’s Hospital on April 14, 2022, at the age of 92 years.

He is survived by his son Al (Phyllis); grandchildren Todd (Jody) Hildebrandt, Georgia (Jamie) MacDonald; great-grandchildren; as well as numerous other relatives and friends.

Lorne worked in a lumber camp at Burns Lake, BC. He moved back to Saskatchewan and began working as a journeyman mechanic. He worked for Merlin Motors for twenty years. When he retired from Ford, he started working for Elim Lodge as a maintenance/handyman. He worked there until he turned 91.

Lorne was active in his church; leader of the Christian Boys club and he was head usher at the Alliance Church for many years.

Lorne liked going fishing, but even more, he like eating fish. Many winters were spent in Arizona, and it was there that he took up wood carving and travelling to the flea markets. Lorne will be missed by all that knew him.

In lieu of flowers, donations may be made to Gideon’s Bible Society.