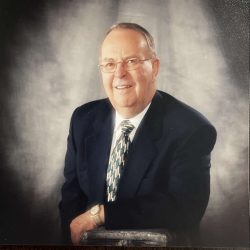 It is with heartfelt sadness that the family announces the passing of Malcolm Ross Weir, on November 6th, 2022, just a few weeks from his 90th birthday.

Malcolm was born at Saskatoon City Hospital, the youngest of four boys. He lived and farmed in the Aberdeen district until 2002. He attended Aberdeen School from Gr. 1 – 12, travelling by horse and buggy in the summer and by cutter in the winter. He always liked animals and enjoyed raising chickens, turkeys, ducks, geese, pigs, and sheep. After a few swine shows with his dad, Malcolm was hooked and even marriage had to be scheduled around the show circuit.

Malcolm married his best friend, Ingrid Jastram on Nov. 4, 1955. She was kind, compassionate and known for her dry wit. They spent 57 years together before Ingrid’s death from Alzheimer’s in 2013. Malcolm was a superb caregiver for Ingrid through each difficult stage of the disease.

Malcolm was community minded, serving on the Community Hall Board helping renovate the “old” hall and building the “new” hall.  He worked hard for the “old” rink and enjoyed his stints on the R.M. Council, the local school board, Parks & Rec. and the Aberdeen United Church until its closing.  He was president of the Saskatchewan Swine Breeders Association, a director of Canadian Swine and the Saskatoon Exhibition. He showed or judged Yorkshire swine from the Royal Winter Fair in Toronto to Vancouver’s P.N.E.

Malcolm loved his sports; from playing in his younger years, to coaching and reffing his children’s teams, and finally watching/listening on T.V. until the day before he died.  He always had great stories about local talent in baseball, fastball, hockey and curling.

Malcolm and Ingrid retired to Saskatoon in 2002 and became deeply attached to their 2nd home. Even though he promised Ingrid not to get on to too many committees, he enjoyed the Social Committee, and the Condo Board terms. Deep friendships formed that withstood the storms of grief, illness, Covid and in the end, cancer. Friends within the condo and beyond made it possible for Malcolm to remain in his own familiar surroundings until a week before he died.

Malcolm and Hilde are so thankful to the Cancer Center, Home Care, Palliative Care and Glengarda Hospice.

Malcolm looked for the best in each person he met and in each day on this earth.  That skill/gift stood him well for all of his 89 years.

Malcolm is survived by his daughter, Hilde Besic (Dubravko), his grandson Amroy, his great granddaughter Aaliyah, his special friend, Mary Ore, his sisters in law Hazel Weir and Phyllis Ouimette and many nieces and nephews.

He was predeceased by his parents Alex and Laura (Connell) Weir, his sister Madge, his brothers Walter, Glen, and Maurice, his wife, Ingrid (Jastram) (2013) his son, Gavin (1975) and his granddaughter, Rayleen Angus Besic (2022).

Donations to the Saskatoon Food Bank and Learning Centre or similar charities in your own locations would be a way of spreading kindness – Malcolm style.

Livestream will be available via https://funeraweb.tv/en/diffusions/63786

For those who wish, masks will be available for those in attendance at the hall.

Martens Warman Funeral Home is honoured to care for Mr. Weir and his arrangements.