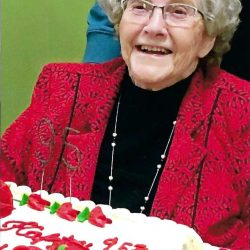 It is with heartfelt sadness that we announce the passing of Margaret “Peggy” Kane at the age of 97 years on October 29, 2021.

Peggy Kane was born January 21, 1924 at Lockwood, Saskatchewan. She was the second child of Alex and Edna McKinnon. Peggy had one brother, Donald, and three sisters Inez, Ethelene and Irma. Peggy grew up in the Lockwood district. When she had completed her schooling the family moved to Prince Rupert, BC.  It was here that she once again met Francis Kane where he was stationed in the Royal Canadian Navy.

In 1944, she and Francis were married. Following the birth of their first child, Sandra Lynn in 1945, and Francis’ discharge from the Navy, they moved back to Saskatchewan to farm North West of Nokomis. It was here that Laurel, Greg and Leslie were born. In 1959 Peggy and Francis moved to the Guy Hummel farm. Peggy worked hard as a farm wife in the field, in the home, and in the garden.  She always had a very large garden, one year harvesting over 1,000 hills of potatoes with the Horbul family for Mike’s Cafe. She canned hundreds of jars of produce, beef and chicken, and always loved her garden.  Her petunias were legendary, spilling over to cover the whole front step of their home.

Peggy and Francis built a new home and moved into Nokomis in 1981. Francis continued to farm with his son Greg and Peggy continued to remain active in harvest at the farm for many years after Francis’ passing.

Peggy enjoyed town life, friends and coffee with the ladies.  She looked forward to the many times her daughters would bring their families to Nokomis to stay for a few days and a good visit, and when sisters and relatives would stop in during their travels.

Peggy loved to travel and saw many wonderful destinations with her husband and children over the years.

Peggy was truly loved by all who went before her, and by all who came after. She will be deeply missed by family, friends, and all who knew her.