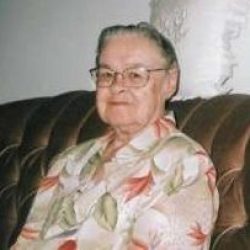 With heartfelt sadness, we announce the passing of Maria Fehr, on January 18, 2023, at the age of 98 years.

Maria was born to Adolf and Anna (Redekopp) Gross on October 11, 1924, near Hague (Greentol), Saskatchewan. She grew up with two sisters, Annie, and Eva; three brothers, Adolf, Abram and Yohann (John) who died in infancy.

She moved with the family to Mexico at 5 years of age. Her dad also made a move to Canada, when he was a young boy, a few months before WW1 broke out, from Austria. Her mother was born in Saskatchewan and was an expert seamstress.

Times were hard, so Maria soon found a second home off and on where she worked for Nettie and Peter Brown. They had no children, and they often had the whole family over, and for Christmas as well. She remembers having no shoes to go to school with.

Maria was very close with her sister Annie, who passed early at age 34 years, with a smile on her face. Her other sister Eva was a lot of fun and a real tease. You had to watch, or she’d pour a bucket of cold water on you.

From her sibling, Annie married a Klassen and when Annie passed, he marries a Leopky, who was a sister to Grandpa Banman’s second wife, Margaret.

Adolf lived in Mexico farming, then later moved to Ontario. His two girls married and owned vineyards. His son has lately moved back to Mexico.

Abram moved to Honduras, back to Mexico then Ontario.

Eva married Frank Ginther, whose mom is a Friesen and a sister to Henry (Anne) Friesen’s dad.

Maria married Peter Friesen and had four children, Pete, Maria, Adolf, and John (Yohan). They all helped with many chores and had many adventures with water snakes, scorpions etc.

She had two big gardens with many vegetables and flowers. They kept horses, cows, pigs, chickens, and some turkeys. She loved dogs and was not a cat lover. She enjoyed feeding her baby chicks with seeds in her hands. Before the cows tail ever got tied up, Pete was the one to hold it and the rest is left to your imagination.

Her wash days consisted of soaking the white sheets the night before in cold water. Then washed in the morning and washed again in hot water and rinsed. They hung on the line and many Mexicans stopped their wagons to admire the crisp, white sheets. On wash days, everyone fended for themselves in the kitchen.

She was a perfectionist in the kitchen as well. Fluffy bread with a crust you could tap. Perfect cut noodles, imperfect ones the dog got. Canned fruit was delicious, and she counted them because they kept disappearing. Talk to her daughter about that.

Her husband Peter worked with birth certificates, passports, etc and he passed at age 39. Maria then moved the four children back near her birthplace in Canada. It was hard leaving family behind.

After a time, she married Abe Fehr, in 1965. They grain farmed near Hague, Saskatchewan. They butchered pigs every year and it was a wonderful place to visit. Her husband loved having the family over. We enjoyed her cream pies, plumi moos, molasses, cream, jam jam cookies, canned raspberries, and apricot jam.

When they moved off the farm to the town of Hague, she left her dog behind at the neighbors. He missed her so much, he wouldn’t eat and died.

She enjoyed trips with her husband to Watrous and Mexico. They would come back with scorpion keychains, a somberero, and hot, so hot you stuck your tongue in water (which doesn’t work (to cool it off.

Some year after Abe’s passing, she moved to Sunset Manor in Hague. There she enjoyed playing skipbo and visiting with many who lived there. Her favorite tv shows were Wheel of Fortune and Jeopardy. She would often have a tasty summa borscht with a touch of buttermilk to give it some tang. Her clupps (hamburgers) were delicious.

Travelling was up her alley, as she took trips to Alberta, B.C., Meadow Lake and Bismark, USA. She would often offer her car and a trip to Prince Albert was in store for a little shopping. One of her favorite places to eat when she went out was Taco Time. When taking drives along the countryside she always had an interest in how the crops were doing.

After a broken hip with complications, she came to live at Warman Mennonite Nursing Home o June 3rd, 2011, where she lived for over eleven years. She loved the staff, and they loved her. It was a blessing, and we are very thankful to see how close they were. Evidenced with “I love you’s”, blowing kisses and handmade cards.

What a lady! We loved her much and she is missed!! May we surrender our lives to the Lord that she served and see her again!