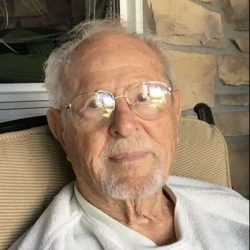 On Thursday June 16, 2022, following several months of declining health and a brief illness, our dear father, Marvin Shewchuk quietly passed away.  A life-long resident of Saskatoon, Marvin lived 92 good and often, great years on this earth.

Marvin was welcomed into the world by his parents, Michael and Suzanna Shewchuk on September,19, 1929.  He often would kid that maybe he did not arrive at such a great time given that Wall Street would crash and the Great Depression start about month after he was born. During his elementary and high school Marvin met several boys who would become very close, lifelong friends and trusted confidants. In 1952 Marvin married Shirley Andrew. Over the course of their 68 year marriage that sadly ended with Shirley’s passing on November 26, 2020 Marv and Shirley forged a devoted partnership.  Together they built a home and raised three children, Richard, Lynda, and Robert. Marvin spent a number of years working at the Bessborough Hotel and then with the Canadian Pacific Railway. For the bulk of his work life however, Marvin had a direct sales position with Libby, McNeill & Libby (later Nestle). Although he enjoyed and was successful in his work, his territory included Saskatchewan and Western Manitoba and often had him away from his wife and young family—which he did not like.

Fortunately, he was able to retire at a relatively young age and he and his “dear” Shirley started a new phase of their lives by becoming snowbirds. Together they spent many winters “going south.”  First they travelled to Florida for several years  and found it quite nice. Then for over twenty years, they travelled to Palm Springs and  came to it view as their home away from home.  Marvin truly enjoyed his retirement, he was an avid reader, keenly interested in (but often frustrated by) world affairs and spending time with his dear Shirley and family. During his summers he “worked” at The Willows Golf Course as a “gofer” which provided him opportunities to schmooze with friends and continue with his endless quest to have that elusive perfect round of golf. It was truly his dream job.  Life was going pretty darn well for Marv—better than most might expect. He had his dear Shirley, frequent contact with his kids, grand kids and friends, summers at the golf course, and winters in Palm Springs. Really one could not expect more. And then, his dear Shirley’s health failed and he lost his North Star. For the 18 months after Shirley passed Marvin ‘s health began to fail rapidly until he decided to reunite with his dear Shirley.

We wish to extend our gratitude to Dr. Stewart, the staff and caregivers at Sunnyside Nursing Home in Saskatoon for their exceptional care of our father over the past few months. We also wish to express our heartfelt love and appreciation for our dear friend, Debbie Beatty who devoted countless hours visiting and helping both our father and mother in so many different ways.

A service will be announced at a later date.