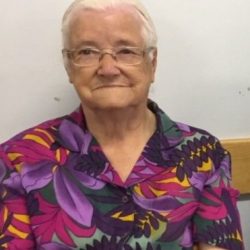 It is with heartfelt sadness that we announce the passing of Mary Fehr on July 16, 2021 at 91 years of age.

Mom was born in Aberdeen Saskatchewan to Peter and Helena Derksen on September 21, 1929. Mom parents moved from Aberdeen to Swan Plain in 1937.They resided there until 1944, and then they moved to Carrot River Saskatchewan.

She’s shared many stories of the hardships they went through, almost losing her mom when she’d scalded herself with boiling water when they still lived in Aberdeen. After they moved to Swan Plain, mom was 12 when she got appendicitis and had to go on a train to Yorkton by herself for surgery and then home again on her own.

Mom had very little schooling as she needed to help in the home, but she taught herself to read and write. In 1944 when mom was 16 years old her parents moved to Carrot River Saskatchewan.

She was baptized on the confession of her faith in the Blue Jay Bergthaler Church. Later she confessed that she had never doubted that she was a child of God.

On August 28, 1949, she married Bernard Fehr. Dad was a farmer so that made it a busy household for mom. Through the years she raised 11 children and did much of the outside chores along with the children who were old enough to help.

Mom was an avid gardener and she loved flowers. When seeding and harvest time came, it was extra busy cooking for the threshing crews the first years and later it was for the combining and grain hauling crew.

When dad was building their new house, they got some extra help in staining the cupboards from one of the boys.  With a lot of sanding, they still turned out a bit darker than dad wanted them too.

One time she was going to go to hoe the garden and she found that someone had sawed off the handle of the hoe! It was now too short for her to use but when she found it was John who had needed a stick, as the story goes, he was the one who had to go out and start hoeing.

In 1963 her parents moved to La Crete, Alberta, so after that, many trips were made there to visit her parents.

When her mother-in-law passed away, she took her father-in-law into their home and cared for him for over 5 years till his passing.

In 1980. dad sold the farm and they moved to Osler Saskatchewan, and in 2007 they moved to Warman Saskatchewan. With dad’s health failing, he was admitted to the hospital just a few months after they moved into their senior condo. He stayed in hospital till January of 2008, when mom wanted him to spend his last days at home so she could care for him, which turned out to be 10 days.

With Eva being at home, it brought mom much comfort to have her as company. One of their favourite pastimes was puzzling. Mom loved to quilt so she kept herself busy with that after dads passing. She made many quilts that were sent to the Ukraine for the poor.

Mom had a servant’s heart! Always blessing people besides her family with many delicious meals and baking. Coffee was always on and the last year in her place in North Haven, as her dementia got worse, we were offered coffee and cookies numerous times in an hour.

On March the 3rd mom was admitted to the Warman Mennonite Special Care Home, and immediately after that the lockdown came.

The last year and a half of mom’s life was one of the hardest for us as a family, as it was for many others. With the lockdowns, when there were many months where family could not go in and visit, the dementia took a toll on her. No Easter visits or Mother’s Day visit. At this time, we saw a steady decline in her health. In December 2020 she broke her arm as she was falling quite often, but she did not like the cast, so it took her only five days and somehow, she got that thing off.

One time Anne had phoned her and she had said she didn’t want that on her arm, but Anne said to her that it needs to stay on so that her arm could heal properly. She said in German, “I’ll take care of it myself already!” and then she’d hung up.

There are many more stories to tell but the most important one is that mom had a faith in God! A simple and profound faith and she lived it her whole life. Before her move to the nursing home mom and Eva always had bible reading and prayer together before bedtime. We are blessed with a rich and godly heritage.

We, the Fehr family want to say a very big thank-you to the Warman Mennonite Special Care Home staff for providing excellent care, love and compassion to our mom during her stay there! God bless you all!

Arrangements have been entrusted to Martens Warman Funeral Home. martenswfh@sasktel.net or 306-934-4888.

If you wish to join Mary’s family and loved ones via live stream, please use link http://distantlink.com/martenswarman.html