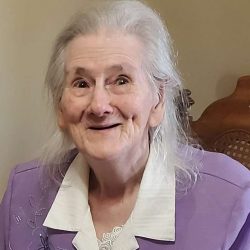 It is with great sadness that we announce the passing of our beloved Mother.  Mary Fehr passed away peacefully in her sleep on September 24, 2022; just the way she wished to go. The last of her siblings to go, she was happily ushered into Heaven in the embrace of her loving Heavenly Father and welcomed by her family and friends who had gone before.

Mary was born on October 10, 1932, to Jacob and Aganetha (Hiebert) Fehr.  The fifth of eight children, she fought to survive. She was likely premature and was born at home as was the custom in those days. They sent for the doctor who came but was in a hurry, there were complications and Mary came into this world blue.  The doctor took one look at her, handed Mary to her grandmother, Susie, saying the baby wouldn’t live and left. Since Aganetha was too sick to nurse her newborn baby, Jacob took his precious baby daughter and wrapped her in a blanket. He then warmed some stones and put her on them to keep her warm. Then he proceeded to feed her with an eye dropper and eventually she improved and lived to tell the story.

In her youth, she loved horses and riding them. Other favorite pastimes were reading, writing poetry, going for walks and embroidery. She preferred working outside either in the huge garden or in the barn with the animals. Mary had been watching her father milk the cows and by age 8 she insisted she could do it. When given the chance, she proved she was capable.  She enjoyed doing it until it became the chore she was responsible for.

When she was eight years old, she started school at Walter Scott School in Great Deer. As the family only spoke low-German at home, she did not know a word of English. Fortunately, she had a kind teacher who knew low-German and patiently taught her English. She completed her schooling after grade seven as she was needed at home to do more chores and take care of the younger children.

They were blessed with three children. Their first child was a stillborn baby girl born April 27, 1955, in the Borden Hospital. The next two were born in the City Hospital, Jean Marian on Sept. 9, 1956; Daniel Marvin on June 27, 1959. By this time, they had settled in Saskatoon. Henry was working as a mechanic at a service station when he contracted polio on Aug. 19, 1959. Little Jeannie was 22 days short of her third birthday and baby Danny was only 7 ½ weeks old. Henry and Mary were only 26.

Henry spent over a year in an iron lung in the hospital where Mary faithfully visited him. Henry was now a quadriplegic, paralyzed from the neck down, and totally dependent on others for his every need. By the time Henry was able to come home, Mary had made arrangements to move to a larger house furnished with a ramp and the necessary equipment Henry would need. This was done with the help of family, friends and government assistance. To start with Mary took care of Henry as best she could with the aid of the V.O.N. and a housekeeper to give her a break to go get groceries, etc. Although Henry was very demanding and needy, she stuck by him for the sake of the children, she wanted them to have a father in their life.  She selflessly took Henry home rather than leave him in the hospital or another institution.

As a family, growing up, we had devotions every day, enjoyed playing games, stamp and coin collecting. We often got a geography lesson looking up on the map the countries where the stamps and coins came from. We also went to church, Henry when he was able too. We enjoyed singing and Bible study with anyone who came to visit.

In 1967, the family moved to a bigger house, where they each had their own bedroom. It was once again equipped with all the necessary equipment for Henry’s needs. The family, homecare and VON continued to take care of his every need.  Henry eventually got some equipment that allowed him to be a little more independent. Mary continued to tend to the garden, groceries, laundry, meals as well as, the needs of the children, etc.  When she did get some time for herself, she could be found reading a good book, writing poetry, shopping at the Salvation Army, buying groceries, or visiting with company. She seldom had time to do anything special for herself.

Throughout her years, Mary was a devoted Christian who shared her faith with and prayed for family, friends, church and missions, etc. It was her sincere desire to see her children and their families come to a saving knowledge of her Saviour. She was a member at Mayfair Mennonite Church which later moved and became Cornerstone Church. She loved singing and was involved in the church choir along with her daughter Jean. She was also actively involved with the ladies’ aid called Mission Helpers. Mary also hosted Bible studies in her home so that Henry could participate. She tithed faithfully to church and missions, etc. She sponsored several children in foreign countries. In later years she attended Open Door Baptist Church where she was rebaptized by immersion and became a member.  Mary and Jean often watched Christian TV programs together.

In later years after the children had moved out, Mary’s doctor told her she could no longer tend to Henry’s every need as it was taking a serious toll on her health.  In 1983 Henry eventually agreed to move out and into Dan’s house on the main floor while Dan lived in the basement suite. Henry hired live-in help to care for him.  Mary and the children still took turns taking care of him when help took time off.  After five years Henry was moved to Parkridge Centre where he lived the rest of his life. Even there Mary was ever the devoted wife going most weekdays, the children usually gave her a break on weekends. Henry passed away suddenly on Feb. 21, 1998; having lived with polio for 38 ½ years.

Mary continued to live in their home until 2001 when she moved into her very own suite at Arbor Green. Jean and Isaac had decided to check out a meeting about a senior residence called Arbor Green to be built and took Mary along. They became interested and decided to put down payments on two suites. This way Jean and Isaac were close by so they could visit anytime and be handy for any needs Mary might have.

Mary especially enjoyed visits from Dan, his wife Peg and daughter Alex, and later also Alex’s husband Kyle and daughter Adalyn.  She took pleasure in babysitting Alex when she was young.  She attended church, made friends, enjoyed playing games, visits and phone calls from family and friends, singing, birthdays and family gatherings, trips and visits with Jean and Isaac.  During the fall of 2001 she even took a trip to the east coast with her dear friend Anne and cousin Tina, who both lived in the same complex, and had a great time.  Visiting the east coast and Anne of Green Gables had been a dream of hers and she was finally able to do it.

After Isaac passed in 2003, Jean took care of Mary as best she could.  But as the years passed Mary needed more care than Jean was capable of giving her and with her own deteriorating health Jean had to eventually put Mary into a private care home, where she spent 16 months before spending some time in the hospital due to being confused. That care home could no longer deal with her, and she was moved to another better equipped private care home where she was happier and had a special friend for a short while until he was moved due to needing more care.

She enjoyed almost weekly visits from Jean and Dan. She really enjoyed having a visit with Adalyn when Dan brought her and Alex along. Adalyn would really brighten Mary’s day; she just loved her visits as much as she loved having Alex over when she was younger. Mary enjoyed looking at pictures Jean had taken, playing Phase 10, and visiting with her. She also enjoyed an occasional visit from niece Janet and daughter Sandy and anyone else that may have come to visit her. She lived there almost 1 year 10 months.

Although Mary had a very hard life, she endured and persevered, a fighter from the start, a survivor to the end, with the help of her loving Saviour, to her dying day. Her health was continually deteriorating and she was longing for heaven, as all her siblings had gone before, leaving her as the sole surviving sibling. After her nightly calls to Dan and Jean to say good night and I love you, she passed away unexpectedly but peacefully in her sleep on September 24, 2022, to be welcomed into her heavenly home by her beloved Lord and Saviour and greeted by her loved ones who’d gone before. She is eternally happy, free from pain and sorrow, perfect health, no more tears or confusion.

Mom’s Memorial Service will be held at Martens Warman Funeral Home Chapel, 402 Central Street West, Warman, SK on her 90th birthday, Monday, October 10th, 2022 at 2:00pm. A viewing will take place prior to the service from 1:00 – 2:00 pm. If you are unable to attend there will be a Livestream available.   You can view the ceremony live or on replay at https://funeraweb.tv/en/diffusions/62137

In lieu of flowers, please consider making a donation to the Heart & Stroke Foundation in her honor.

Martens Warman Funeral Home is both honoured and privileged to be entrusted to the care of Mrs. Fehr. Please share your memories of Mary in the Guest Book.