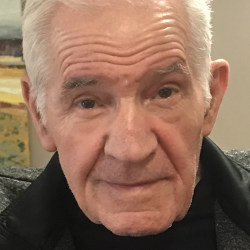 It is with broken hearts that our family announces the passing of Maurice on December 21st, 2020, at the age of 86 at Oliver Lodge, due to Covid-19.

Maurice was born on February 8th, 1934 in the back of a Model T Ford on the way to the Hospital in Eston, SK, to Rose Amande and Alfred Turcotte. He grew up on a farm and attended a one room school until the age of 15. While still helping to take care of the family farm, he also found work with a local rancher for a few years. He then moved to Saskatoon at 19 where he worked for a construction company while also helping look after the Community Pasture in Dundurn. He enjoyed riding bulls and broncos at the local rodeos for a short time, until a broken foot changed his mind. He as well played guitar and sang with local country bands and friends; he was known by the nickname “Smiley”. We spent many nights at home with family and friends singing and dancing to the music. He sang at many weddings and funerals over the years for friends and family. Diagnosed with Parkinson’s in the late 90’s made singing difficult, but he still managed to belt out some good tunes.

Maurice met his future wife LaVon in the restaurant at the Old Bus Depot where she worked in 1957. They married on September 12, 1959 and celebrated their 61st Anniversary in September 2020. Being born in the back of a Model T, it was only fitting he chose his career to be a Highway Man. He began first in the trucking industry, and then in 1958 he was hired on with Saskatchewan Transportation Company (STC) and spent a 35-year career accumulating over 4 million miles. After retirement from STC, he started with Twin River Tours and accumulated many more miles, as well as driving for the Saskatoon Blades to numerous hockey games on their bus. He then started interprovincial pickup and delivery of vehicle’s for Auto Clearing for 15 years. Maurice and LaVon loved to travel and were snowbirds for a few years until the grandkids started to come and gave them more to be home for. But Maurice and LaVon always kept an RV around to go camping with the family, and for visits and reunions with extended family. Maurice was a quiet, gentle man who was proud of his family and especially proud of his grandchildren. There was nothing he would not have done for them. Over the years he attended many fastball, hockey, basketball, volleyball games and tournaments. You name the sport or activity; he would be there to cheer them on, no matter what. A true gentleman to the end.

Your life was a blessing, your memory a treasure, you are loved beyond words, and missed beyond measure. Rest easy now Dad/Grandpa, we love you.

We would like to thank Dr. K. Roelens, Reverend D Wooff, and the staff at Oliver Lodge for their kindness and care over the last 3 plus years.

Cremation has taken place and a celebration of Maurice’s life will be held later in 2021. A notice will be posted at that time.