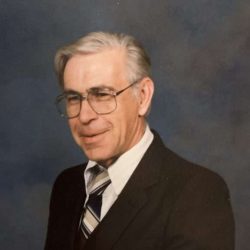 Melvin Peter Penner of Hepburn, Saskatchewan, left his earthly body on August 16, 2022 at the age of 85. Mel was in St. Paul’s Hospital in Saskatoon, Saskatchewan during the final weeks of his life where he passed with his wife and daughter at his side.

Mel was born on May 23, 1937 in Saskatoon, Saskatchewan to John and Tena Penner. Mel married the love of his life Mary (Giesbrecht) Penner of Hepburn, Saskatchewan on April 7, 1962. Mel and Mary had 3 children (Joe, Patty, and Glen) and lived in Hepburn for most of their 60 years of marriage.

Mel earned his radio and TV repair certificate in 1973 and owned Mel’s Radio and TV in Hepburn for a short time. He worked hard his whole life to take care of his family. While many of those working years were spent as a mechanic, Mel had a hand in many trades. He would often say he was a “Jack of All Trades – Master of None” and he really could do just about anything. He was a humble man and didn’t want us to gush on about what a great man he was. He was a down-to-earth, hard working. God fearing, family man. He wasn’t perfect but he did his best and we are better for having him as the Spiritual leader of our family. He will be deeply missed.

Mel will forever be remembered for his dry sense of humor fondly known as “Penner Humor” and for his musical talent. He spent many fun hours jamming with his friends and playing games with his family.
Melvin was a believer in our Saviour Jesus Christ and was baptized at the Hepburn MB Church later in his life. His strong faith was one of his most outstanding qualities. His Bible was always near and he started and ended each day in the Word. We know that he is at peace in the arms of His Lord.

Melvin was the youngest of 10 children and was the last of his immediate family to pass. He is pre-deceased by his parents John and Tena Penner, siblings Clarence and wife Tena, Mabel and husband Pete, Pearl, Rueben and wives Maggie and Liz, Irvin, Ernie and wife Ruby, Allen and wife Virginia, Adelia and husband Melvin, Earl, and Mel and Mary’s youngest son Glen.