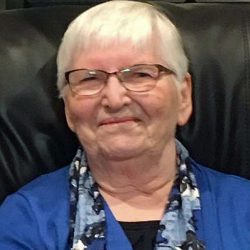 It is with heartfelt sadness that we announce the passing or Norma Merilyn Steinsvoll on January 30th, 2022, at the age of 87 years.

Norma grew up on a farm in South Allan, Saskatchewan.  Norma attended Strawberry School in her youth. She completed grades 9 and 10 through correspondence and for grades 11 and 12 she attended Saskatoon Tech. During this time, she also started working at the Wheat Pool, testing grain. Her parents were concerned that her schoolwork would suffer, believing she had taken on too much with both work and school.  They were wrong to worry, as she finished school and her job at Wheat Pool resulted in some of the best homemade bread!  Norma continued her education by taking a Lab and X-Ray technician course in Regina. She took her skills to Outlook Hospital and continued her career until she got married.  Even in her later years, her passion for learning continued.  She tackled technology in her sixties and seventies, on her computer, playing games, sending emails and active on social media.

Norma married the love of her life, Grant, in 1957.  They knew each other as children, as their farms were only a mile apart.  Once married, Norma and Grant made the Steinsvoll family farm their home.  She had a very large vegetable garden and helped raise the chickens and cows.  When they had the occasional dairy cow, she would separate milk and make homemade butter and ice cream.  Always known for her hard work, she made being a mother and taking care of the farm her priority. Norma was known for her baking and canning, which would help them get through many long, cold winters on the farm. Grant and Norma retired from the farm in 1984 and moved to Saskatoon.

Once Norma began living the city life, she became involved in many activities, and volunteered much of her time.  She got involved in politics and enjoyed supporting her party. Norma gave back to the community. She put on many miles going door to door to gather donations for countless charities.  At a time when many people her age were requiring help in the home, she began a job supplying that support.  She enjoyed cooking, cleaning, or just spending time with many seniors while working for Home Support.  Her passion was music, and it was always a big part of her life. She joined the Orpheus Choir, and you would see the enjoyment on her face when she was practicing and performing. Through these events she made many good friends.

Norma will be remembered most for her love of family.  She was a proud mother to her three daughters and had such a special and unique relationship with each of them.  Her grandchildren were always excited to go to Grandma’s house. If she was not out adventuring in the park with them, she was in the kitchen cooking homemade meals and baking for them. Norma hosted many family events where many fond memories were made.

Wherever Norma went, there was food, love & laughter.  She will be forever missed by her loving husband, daughters, grandchildren and all of her other family and friends.

A private family service will be held at a later date. Arrangements have been entrusted to Martens Warman Funeral Home (306) 934-4888.