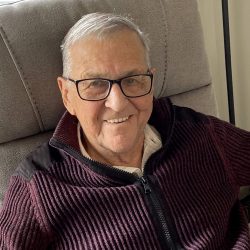 It is with heartfelt sadness that we announce the passing of Ole James Kilden, on August 13, 2021, at the age of 74 years.

Ole Kilden was born on December 8, 1946 to Mary and Ole Kilden at Prince Albert, SK. Ole passed away on August 13, 2021, in City Hospital in Saskatoon, SK. His passing came after a 6-month struggle due to complications from Type I Diabetes which he was afflicted with for 57 years. Ole will be greatly missed by his wife Armande of 41 years and by their son Jens.

Ole’s lifelong passion for farming was second to none; his diligence in running his farming operations included crop and livestock. In addition to agriculture, Ole was a man who was enormously competent in all the endeavours he undertook: sales, public speaking, teaching, handyman, craftsman, and winemaking; he would always perform tasks with care and attention to detail.

Most of all, he loved people and more so to make people happy. Whatever the mood in a room, everyone would be a little more cheerful after Ole got there. No matter how much pain he was in, his voice would project a tone of encouragement for the person or people he was conversing with. Ole was a great many things, but above all else, he was always described as calm and caring. Ole’s zest for life and the care in which he lived was inspiring and powerful.