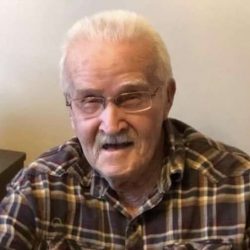 It is with heartfelt sadness that we announce the passing of Pete Doell, at the age of 97 years and 7 days, on March 19th, 2022.

Food was always an important concern for Dad. Have you eaten?  Can I make you lunch? He was always trying to feed everyone who entered his door. Dad worked hard during hard times to feed and clothe not only his own family, but to also share with other families down on luck. His were helping hands in whatever way he could.

Dad wore many hats. He’s been a husband, a horsetrader, a farmer, a  fisherman, a garbage man, a gardener,  a trucker, a foster Dad and my Dad. He is missed.