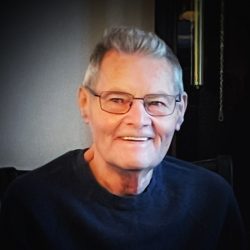 With heavy hearts we announce the passing of Mr. Peter Teichroeb of Warman, SK. He passed away peacefully with his family by his side at the Royal University Hospital on August 13th, 2021 at 3 o’clock in the morning.

Peter was born in 1940 to Jacob and Margaret Teichroeb. Baptized in the Martensville Bergthaler Church in 1962, he lived every day of his life for Jesus.

In 1961, he met Mary Adrian who became the love of his life and they married in 1964. They were married for 57 years, during which they had 6 children, 11 grandchildren, and 14 great-grandchildren. He loved each and every one of them “to the moon and back” he would often say.

He worked at Nutana Machine as a welder and fabricator for 42 years. Although he could certainly have retired much sooner, he loved his job, finally retiring when he was 72 years old. Never once did he complain about having to work.

He had a great love for animals and the outdoors, spending much time fishing, camping, and quadding with his wife and beloved dog Kiki, as well as many family members.

He leaves us behind him in much sadness, but also joy, knowing we will meet again in Heaven someday.