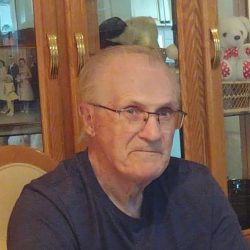 Roy Oscar Johnson, of Zenon Park, SK, went home to be with his Lord Jesus on Wednesday, August 11th, 2021, after succumbing to his injuries from a severe fall.

In the early years, Roy was a short haul truck driver.   Then he started long haul trucking for various companies for over 30 years.  He was proud to drive his semis all across North America.  Roy has thousands of pictures and stories of his many travels.  He enjoyed writing and sending postcards to his friends and family to help him keep connected across the miles.  Roy enjoyed golfing, playing games, ice cream, miniature trains, going for coffee and meals with family and friends and of course, golfing!  Roy also did a lot of building and carpentry work.  He owned a construction company for many years building single family homes (including our own) and did numerous renovations.  He built things that stood the test of time.

Thank you to all the staff of Ward 6300 at RUH for their compassionate care of Roy during his last days.

A private family memorial service will be held at a later date.

Funeral Arrangements have been entrusted to Martens Funeral Home in Warman SK (306) 934-4888.