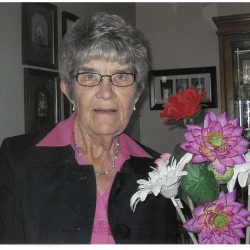 Sarah Wiebe (August 31, 1931- August 6, 2022)
Sarah (90) was the loving wife of Bill Wiebe and devoted mother and grandmother to her children and grandchildren as well as her stepchildren and grandchildren.   Sarah was promoted to her heavenly home August 6th, 2022.
Sarah was born in Hague, Sk.  She loved to tell the story of being born at home in their house that was built on the road.  She was the oldest of 11 children.  One brother died when he was just a boy.  Her mother died after Sarah was already married.  Her father remarried and together her step mom and dad had two children together.
She lived most her life around Martensville.  She was married at the age of 21 in 1952 to Henry Wiebe.  They had 5 children.  One son (Ken) died at the age of 23.
Sarah is well known in the area as she and Henry were the founders of the Wagon Wheel Restaurant in Warman.  They were married for 34 years till Henry’s death in 1986.
In 1987 she married Henry’s brother Bill and they were married for 34 years.
She will be remembered for her loving compassionate heart. She loved to cook for her family and friends.  She loved music  and found much comfort in listening to gospel music.
The last few years Sarah’s life were troubled by dementia.  In April of this year,  her pains and dementia were too much for them to cope with at home so after a brief stay in hospital she was moved to The Lutheran Care Home in Saskatoon where she was for 2 months till God graciously called her home to be with him.
She will be missed by her husband Bill Wiebe,  her children: Marion Fehr, Sharon Loeppky, Joe (Barb) Wiebe,  daughter in law Linda (Bob) Rieber, Calvin (Diane) Wiebe  and her stepchildren: Bob (Marion) Wiebe,  Debbie (Terry) Ridgway,  Theresa (Dan) Wright,  Judy (Dave) Wright,  Garry (Pat) Wiebe as well as their 28 grandchildren and 37 great grandchildren and 1 great great grandson.

Her celebration of Life will be held Monday August 15th at 2 pm (viewing from 1-2 pm) at the Osler Mission chapel in Osler, Sk.

You can view the ceremony live or on replay at https://funeraweb.tv/en/diffusions/58551