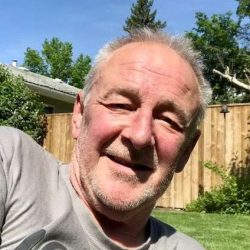 It is with heavy hearts that we announce the sudden passing of our beloved Terry Anderson, at the age of 60 years, on April 15th, 2022. Terry was a treasured dad, brother, and best friend to many.

Terry was born November 25th, 1961, to Mary and Clare Anderson. He grew up on the family farm in Mayview, along with his two brothers, Jim, and Dale, and two sisters, Eileen and Karen. Terry was the “baby” of the family and was spoiled by all, especially his big sister Eileen. After moving to PA, then Calgary, Terry settled in Saskatoon where he worked for Canadian Blood Services for nearly 20 years, followed by Broda Construction. Terry married Rochelle Minosofer on September 7th, 1991, and together they had two beautiful children, Brady and Carley, who were the center of their lives.

Terry took his role of Dad very seriously. He loved nothing more than to be with his children, who meant everything to him and brought him so much pride and joy. Not only was Terry their dad, but he was also their best friend. Together they have many cherished moments, whether it was spontaneous drop in visits, on the phone or on the many trips they took together. Terry spoke often of his trips to Vancouver and Toronto with Brady and Carley, where they did some of his favorite things like watch the Blue Jays and see the Maple Leafs row. Terry has so much love for them and will watch over them forever.

Aside from being a great parent, Terry was also a generous, humble man who exhibited love and friendship to everyone he met. His unique sense of humor and wit easily had everyone laughing. He could light up a room with his smile and positive attitude. Terry was a true friend to so many and his garage door was revolving with countless friends stopping in to visit him daily.

Terry is survived by his children Brady and Carley and their mother Rochelle Anderson.  Eilleen and Dale Bruce, their children Delaney (Chantal), Brandon (Niki) and Denae.  Karen Anderson and her son Dustin (Jacqueline), daughter Dani (Dave). His brother Dale (Anna) and children Cayle, Chase, and Ciara.

Terry was predeceased by his mother and father, Mary and Clare Anderson, brother Jim and numerous aunts, uncles, and cousins. Terry will be reunited with his special little dog Chiquita. Terry touched many lives and will live on in our hearts forever.

A private family viewing has already taken place, the arrangements have been entrusted to Martens Warman Funeral Home (306) 934-4888.