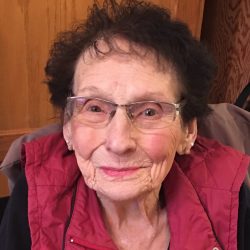 Mom passed away peacefully in her sleep on Sunday morning, April 4, 2021 at Meadow Lake hospital. She was born July 17, 1927 to Roscoe and Hazel Ditto in Handel, Saskatchewan. She was the eighth of 11 children and the last of the Dittos to leave us.

She married Joseph Bauer on August 19th, 1948. They were blessed with 3 girls: Donna, Dianne and Joanne. They lived at Makwa, Hartwell (near Turtleford) and Glenbush before settling back at Makwa in 1967 where they owned the Hotel and Bar for 7 years. Many residents still remember her hospitality there. After they sold the hotel Mom couldn’t remain idle and worked at various businesses in Loon Lake, including many years at the Loon Lake hospital in house keeping. In addition, she always managed to have a huge garden, beautiful flowers and fresh baking in the house. If there was a berry to be picked, you knew where she could be found and she always made a point of saying that her berries were picked the cleanest.

Dad passed away August 22, 2001 and Mom continued to live in her house at Makwa. She did move to Martensville for a few months, but she missed her home, so we moved her back 3 long months later. She said that it would be her last move, as her next move would be “down under” and she didn’t mean Australia.

After moving back to Makwa, Alvin, Mom’s beloved friend, became her dancing and travelling companion. They travelled to Polka Fests and vacationed many times, travelling to different States including Hawaii twice, Ireland and Mexico. We laughed when she failed to understand how anyone would travel to Mexico for a holiday and then she attended her granddaughter’s wedding in Mexico at the age of 87. Her perception of Mexico definitely changed. Prior to travelling with Alvin, she had many trips to the States with family and was proud that she had visited all of the provinces but one.

Alvin and Mom loved to play Kaiser along with the playful arguing that came with it. Thank you to Alvin for bringing such joy to Mom’s life. She thought the world of him as do all the members of her family.

In 2015 Mom had a heart attack on her birthday. Prior to that she had said she would leave town if we were planning a party for her. We kidded her afterwards that taking an air ambulance to Saskatoon was a somewhat extreme measure to “get out of town”. Thankfully, we were able to have a great party for her 90th birthday and she didn’t get away on us. Her life changed a bit after the heart attack, although she kept trying to do what she had always done, and never gave up. She started knitting dish cloths to pass some time and loved to give them away to family and friends. There will be many memories of Thelma, as dishes are washed all over the country.

Our Mom was an amazing, loving, caring, kind, generous, thankful and forgiving lady. She learned from a young age about hard work while growing up on the farm. She was the one who helped her Dad with chores when her brothers were gone to war and who started working a job at the age of 16. She was a hard worker and never complained about the task at hand. This work ethic was what kept her going as she continued to cook, clean, bake and preserve until a few months ago. It bothered her deeply when she could no longer do these things.

She loved kids, and children of all ages loved her. Her grandchildren and great grandchildren have many happy memories of Gramma/GG which include her playing and teasing them, in true Ditto fashion. She was always thinking of others. She hated to see anyone alone for holidays and always made sure there was room at the dinner table for them. Throughout the years mom often sent meals from her kitchen to lonely bachelors.

Mom was meticulous with her appearance and took pride of ownership in all that she had. Her make up was always put on in the morning, and bed made as soon as she got up (including the morning she had her heart attack). She was very, very neat and a friend recently said “everywhere Thelma went, it was clean!”

She was a great mom who enrolled us in any extra curricular activities available. She was open minded and exposed us to different religions so we could make our own choices. Trust and respect were a crucial part of her parenting style.

She was adventurous, easy going and would try most things at least once (calamari, helicopter ride at age 86). She bravely went on a boat ride in Kentucky, despite her dislike of boats and enclosed places through which she knelt on the floor and closed her eyes for the entire ride.

She was optimistic and positive when renewing her passport after her heart attack for the maximum amount of time, in hopes of travelling again.

Now she has taken her final trip where she will surely be embraced by her family and friends. She had such a huge heart and will be missed dearly by all. The void that she leaves cannot be filled and we have been blessed to have had her in our lives for such a long time.