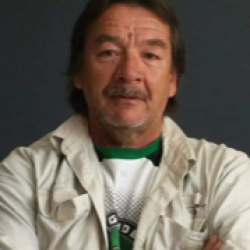 It is with great sadness that we announce the sudden passing of Thomas (Tommy) Douglas Ericson.  Tommy was born in Buffalo Narrows, Saskatchewan on April 28, 1957 and passed away in Buffalo Narrows on April 23, 2021 at the age of 63.  Tommy was the second child of Doug and Rose Ericson.  Our family moved many times during our lives, with the earliest move for Tommy was when he was a baby.  The family moved to Green Lake, Saskatchewan when Tommy was 9 months old.  Shortly after the family moved back to Buffalo Narrows.  Over the next few years, sisters Sandy and Wendy would join the family.  As a young child, Mom remembers Tommy playing on the big dock in the summer – fishing until it was dark.  Mom would cook the perch that he caught.  We enjoy a laugh as mom described filleting a perch.  He loved fishing and family.

In 1965 the family moved to Minnedosa, Manitoba before relocating to Winnipeg.  In Winnipeg Tommy’s last sibling Merle would join the family.  There are many stories of Tommy during this time, but the one we all remember is the story of Tommy “borrowing” his brother Gary’s “home-made bike”.  Unfortunately, Tommy was hit by a train, running away from his brother.  Thankfully, it was slow moving train.

We lost dad in 1970 and eventually ended up in Minnedosa, Man.  We spent the next 4 years there, before moving to Buffalo Narrows in 1974.  Mom ran the local bakery for a time, and Tommy made a few trips delivering baked goods throughout the north west. Some of you will remember the party he threw in the bakery where pizzas were cooked throughout the night instead of the orders.  He spent more time enjoying life, being a teenager in the 70’s and worrying about that moustache that never quite grew in the way he wanted.  He thought of himself as a ladies’ man and for now, we will leave most of those stories for another time.

Life certainly had its ups and downs for our brother.  He was married and divorced, worked at many jobs throughout Saskatchewan and Alberta and tried to do the best that he could despite his lifelong addiction to alcohol.  He loved music, playing guitar and harmonica, always wanting his kids to be musical.  We think he had dreams of developing them into the Ericson 5 or something (LOL).  Tommy welcomed 6 children into this world – Justin McCoombe, Ian Desjarlais (Pam), Sheri Petit (Clayton), Adam Ericson, Amber Ericson (Jeremy) and Tom Ericson Jr. (deceased 2009).  Please keep Tommy’s children and grandchildren in your prayers during this difficult time.

We lost Tom Jr in 2009 and since that time, our brother Tommy has not been the same.  Tommy tried to live a sober life only to find comfort in his addiction.  His pain and sorrow were evident.  If only we could have eased his burdens and shouldered him from his darkness.  We will never really know what troubled Tommy, but losing Tom Jr. was the hardest thing our brother and our families have gone through.  We truly believe that Tommy and Tom Jr. are together, along with friends and family that have left this world far too soon.

As a family we are grateful to the community of Buffalo Narrows for embracing Tommy as he was and always worrying about his wellbeing.  He loved to hang out at the Friendship Center or sit outside the Northern, always had a smile on his face, a greeting to everyone he met or a tease to make you smile.  He was kindhearted, loved his family, adored his grandchildren, and always thought of his nieces and nephews – who he referred to as “niece” or neph”, unsure if he didn’t remember their names or if this was his way of staying connected to family.

Tommy had a great love for the dogs in our lives.  Humphrey was one of those dogs.  Tommy could not drive away without Humphrey chasing him and jumping in the back of the truck.  Tommy’s latest walking buddies were his sisters’ Huskies – Shiloh and Kenai.

Tommy had many friends, in many places, that remained lifelong friends.  Facebook has been a blessing to allow him to connect with friends from years gone by.  For those that have passed, we are comforted knowing they are now gathered to welcome their friend to his final home.

We will be forever grateful for the loving guidance and fellowship that Tommy received from Howard & Marlene Thompson.  Thank you to Peter (Slim) MacDonald for always being there for Tommy, worrying about him and always willing to help.  And even though they were divorced for some time, Janet you are part of our family forever.  Thank you for being there to assist with making funeral arrangements.  Special thanks to Jamie McCallum, for ensuring that as a community we pull together to assist families with the costs arising during this time.  There are so many people to thank, know that you are in our thoughts and prayers for all that you have done for Tommy.

We would like to thank the many EMT’s, nursing staff, hospital staff, physicians, and care givers that helped keep Tommy with us for so many years.  You were angels in his life, and we are forever grateful.  Tommy would be devasted to know that he was COVID positive at the time of his passing and would want anyone that had been in contact with him over the last 2 weeks to get tested and isolate.

Due to the Pandemic, there will be a Celebration of Tommy’s life at a later date.

Donations in Tommy’s name can be made to the Buffalo Narrows Elders Fund that is fundraising for a Long-Term Care facility in Buffalo Narrows. Please contact his sister Sandy Ericson, Mayor of Buffalo Narrows, for more information.

Tommy would want his last words to be “Love ya!!”.