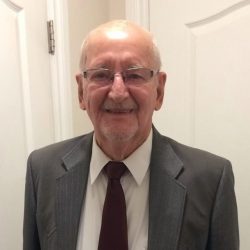 With deep sorrow and sadness, we announce the passing of Thomas Reuben Boschman on May 13, 2021, when he was received safely into the arms of Jesus. Reuben was born at Petaigan on September 10, 1937, the eldest child of Jacob and Elizabeth Boschman.

Reuben grew up at Petaigan and received his schooling at Woodchuck school. He came to know Jesus as his Saviour at a young age and church, youth group and young peoples were always a priority during his childhood years and that carried forward into adulthood. He was baptized upon confession of his faith in June 1959 along with his sweetheart, Mary Ens.

Reuben and Mary were married on September 27, 1959 and lived on the farm they rented located 3 miles west of Carrot River. During those early years of marriage, Reuben and Mary continued to grow the farm all the while, working for Sask Forestry and SaskTel in Carrot River. They were overjoyed to welcome Velda Lynn into their lives on July 14, 1964 and then Bradley Wade on September 10, 1968. During these years, it became evident that Reuben’s dream to farm was not going to last so they had no choice but to sell the animals, the machinery and everything else they had accumulated over the years and leave the farm. They moved to Moose Range where Reuben became a grain elevator agent and then later on into Carrot River when they became the owners of Boschman’s Lucky Dollar Store.

From there, Reuben and Mary made their home in different locations and ending up in the oilpatch for the last 10 years of Reuben’s employment before retiring to the cabin at Tobin Lake. Tobin Lake became a retirement home for them, spending summers there and winters housesitting for different people in Saskatoon, Lloydminster, Nipawin and Warman. It was at this time in life that Reuben learned to play the guitar. He loved music and it was a dream of his to play an instrument and the guitar was the one for him. It brought him hours and hours of joy playing alone and with family and friends. He was always so proud of his family when any one of them showed an interest in music because it was a real passion for him.

Reuben and Mary made a permanent move to Warman 5 years ago and it soon became home for them as they developed new friendships, became involved in the Warman Seniors and the Warman Bible Fellowship after their church in Saskatoon closed. The Saskatoon care group they had been part of remained intact and they continued to meet for weekly bible study, regular trips to Botchie’s Lake for a day of fun and fellowship and special meals together. That care group was a lifeline for Reuben and he looked forward to going every week.

The biggest bonus for Reuben and Mary was living close to family after they moved to Warman. Carl and Velda and their family all lived in or around Warman and it made the trip from Calgary for Brad and Elisa and their family 3 ½ hours shorter which meant more time together.

Reuben truly was a man who loved people and he had a way of creating a safe place for them to be real. He was never judgemental and he just accepted them as they were. Mary often found him in the mall, visiting with a stranger or waiting in the vehicle reading his Gideons New Testament. He was a man of few words but he spent many hours praying for family, friends and our world.

Please join us online for the memorial service June 4th at 1:00pm at http://www.livememorialservices.com/Home/ServiceDetail/13823.