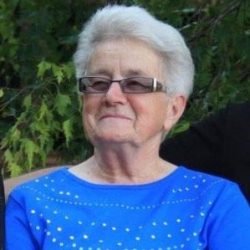 Mom was born in Rosthern, SK on August 28, 1934 to Peter and Agnes Penner. She moved with her parents to BC for a short while before returning to Saskatchewan in 1948. Mom was baptized on June 1, 1952. She married Peter Siemens on June 28, 1953 and they spent the majority of their married life living in Osler, SK. They both became members of Osler Mission Chapel. Mom was a great homemaker who loved to bake bread, buns, cakes and cookies for the many gatherings of family, friends and music sing songs.

Mom remained living in the Osler home after dad (Peter) passed away in 2008. When owning a property became too much work for her, she decided to move to Bethany Manor in 2013 where she soon became friends with many of the residents there. Mom frequented Smitty’s restaurant in Lawson Heights Mall where she met Aron Friesen. After a few months of getting to know each other, they were married on April 20, 2019.

If you are unable to attend the service, please join us by live stream at https://distantlink.com/Martenswarman.html