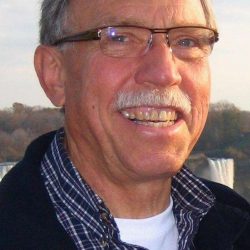 With heartfelt sadness, we announce that Wilfred Ernest Gaertner, age 81 years of Martensville, SK, went to be with Jesus on Friday, March 18, 2022, at St. Paul’s Hospital, Palliative Care, Saskatoon, SK

Wilfred was born near Tisdale, Sk. Where he lived on the farm with his parents (Henry and Marie), two brothers (Gerhard and Arthur) and sister (Elfreda). He married Shirley Lepin on June 16, 1962. He worked at Caronport High School and Briercrest Bible College for 23 years. They raised their three children before Shirley’s passing in 2001. In 2002 he married Sharon Allcock. They lived in Prince Albert, Sk. Where Wilfred was pastoring at Community Bible Church, before moving to Martensville to retire(ish) in 2008, where he served as pastor of Martensville Mission Church.

Wilfred graduated as a music major from Briercrest Bible College, received a B.A. degree from the University of British Columbia and finally obtained a Master of Music degree in vocal performance from the University of Regina. He also spent one year on a post graduate study grant studying music at Houghton College in New York State. He was a teacher, music director and pastor, and served on multiple boards. Wilfred’s interests included family, playing hockey, gardening, golfing, walking, and travel. He was involved in many camps and serving along side John Martens ministering at many funerals.  He was a diehard Rider fan. He will be greatly missed.

A Celebration of life will be held on Saturday, March 26, 2022, at 2:00 p.m. at Dalmeny Bible Church (406 Wakefield Ave. Dalmeny, Sk.) with Jordan Gaertner Officiating. Interment will be held at Hillcrest Memorial Gardens prior to the service for family only.

In Lieu of flowers, donations in Wilfred’s memory may be made to Ranger Lake Bible Camp.  https://rlbc.ca/.  Wilfred’s Memorial Fund.  Arrangements entrusted to Warman Funeral Home 306-934-4888. For those who are unable to attend Wilfred’s service, it will be available to view online at https://youtu.be/MaU-ZiSEoUM