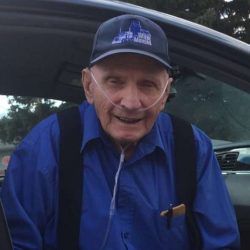 William “Bill” Friesen passed away peacefully in his home with his loving wife, Sarah by his side, on September 30th, 2022 at the age of 82.

Bill left an impression on every one he met with his loving heart, infectious smile and sense of adventure.  His greatest joys in life were family and music.  When the name Bill Friesen comes up, everyone remembers him for his remarkable singing voice and a guitar in his hands.

He was born on February 15, 1940 to Jacob Friesen and Anna Friesen {Doerksen) in Aberdeen, Saskatchewan. He was one of 13 children, Abram, Susan, Peter, Jacob, Aaron, Mary, Michael, John, Cornelius, Frank, Erdman and Ann.

Starting at the age of 14, he began working at a series of different farms throughout the province. He then worked various constructions jobs including a company he started with his brother Erdman called Target Construction. From there he worked at Flexi-Coil for many years.

Bill married his soul mate Sarah on August 20th, 1994.  As a married couple they moved to Prince Albert and worked as apartment caretakers. When they retired they relocated to Hepburn, then to Dalmeny and lastly to Pioneer Place in Warman.

Martens Warman Funeral Home is honoured to care for Mr. Friesen and his family, during his service arrangements.