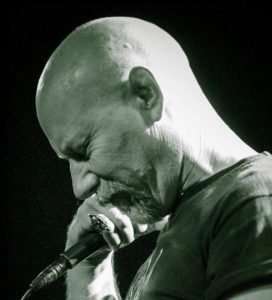 Kim passed away early on a Sunday morning with his wife of 32 years gently holding his hand. His big sister, with whom he shared a special bond, was there by his side.

Kim had been diagnosed three years prior with stage 4 pancreatic cancer, given mere months to live. He fought valiantly to live a life of fun and laughter through the pain. Kim had such a strong will.

Kim was born in Melfort, Saskatchewan. He spent his childhood riding his bike, exploring the countryside with his best friend Wendell, a.k.a “Beef”. Kim took all his schooling there until graduating high school. He spent a couple years in Melfort playing in his first band, Tangent. He then went off to college in Victoria, British Columbia.

Kim worked as a building inspector for the City of Saskatoon. He loved his profession and was a skilled tradesman and talented handyman.

Kim had many passions, chief among which was music. He was a very talented singer, fronting his own band Winterkill through the music circuit of late 80s and early 90s Edmonton. Kim made friends everywhere he went, legendary for his humour and wit. Every year he would camp with friends, and participate in “Tushfest”, a charity concert event raising money for cancer patients. Even twenty years later, he is still fondly remembered by those back in Edmonton. Every pet got a silly name. If he liked you, you got a nickname as well, and everyone seemed to end up with one eventually.

Kim loved and appreciated nature. Our family were weekend birders, touring around Saskatchewan, enjoying family time and looking for that elusive pied-billed grebe. Kim was eager to teach his children about nature, finding frogs in dirt mounds at the lake and taking dusk drives to find and observe an owl. When the family moved to Saskatoon from Edmonton, Kim began banding birds with the reknowned orinthologist Dr. C. Stewart Houston.

Kim is survived and lovingly remembered by his wife Tammy and his two sons Jedediah and Jacob, and also by his brothers Kevin and Kent, his sister Kathy(Bill), and his mother Jean Barbara McHarg, aunts Isa and Edna, and many cousins. Kim was predeceased by his father, Robert Gordon McHarg, his father-in-law Gordon Melvin Woodard, and baby brother Perry.